Pop'n Music Da!! is an educational typing game for kids, designed to teach the layout of the keyboard, as well as typing out words and sentences by touch typing.

The major difference is that at a certain point in each song, the player is prompted to type out Japanese, such as SUIKA, HARI, SORA, etc. During these segments there are two bonus lines, Scoring before or at the first will give the player a Great, and scoring before or on the second grants a Good. Scoring after the final line will only give an OK!!. The standard rating for all other notes are Great, Good, OK!!, Miss, Bad, and Poor.

The menu includes three lessons. The first is Introduction打!!, which introduces the player to the home row keys and standard typing style.

The next is Lesson打!!, which includes four modes, キーウチレッスン, which teaches the alphabet, モヅウチレッスン teaches hirigana, タンゴウチレッスン teaches typing out full words, and プラスビートレッスン is the last mode, teaching the player to type to the beat. The first 3 modes has 4 levels each, and the has mode only has 3 levels.

The final lesson mode is Master打!!, which contains the standard gameplay. The three selectable modes are Normal, Expert, and Play Demo. Normal and Expert are the standard play modes, and Play Demo sets the song chosen to autoplay. Songs are rated on a difficulty scale of 1-10, and from Easy to Hard followed by a number.

To unlock PULSE, clear all ten songs on either Normal or Expert Mode. Upon clearing them all, PULSE will appear in the list.

The four modes is Lesson打!!

Screen after picking a song. The small keyboard shows what keys are used in the song 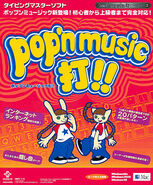