Although there were no Battle or Challenge modes, a Best Hits! game play mode was added.

Title screen. Mimi and Nyami's designs change each time the screen is accessed, as does the background music 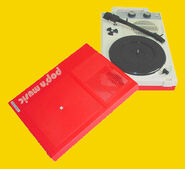 A portable record player awarded after the Internet Ranking ended

A flexi disc that was also awarded