Pop'n Music 3 (ポップンミュージック 3, Poppun Myujikku 3?) is a Japanese music/rhythm video game, developed by Konami and Bemani in 1999, and the third release of the Pop'n Music series.

This installment features a new game mode called Hyper Mode, where you can play song courses (in similar fashion to Expert Mode in the old beatmania games). Like the name suggests, all of the songs are Hyper charts. During game play, the groove gauge starts out as full, and cannot be replenished except by clearing stages, which give back a little health. Once the groove gauge is depleted, a message "DANGER" is shown as well as a countdown timer. During the countdown timer, if you achieve enough GREATs, the game continues; otherwise, the game ends. 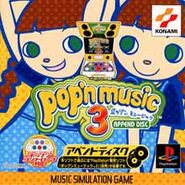