Travelling to Japan, as well as surfing

Myself, of course! Hamburgers and ice cream too!

Perry-san is one of the characters from Pop'n Music 18 Sengoku Retsuden.


Hiiii!! I'm Perryyyy! Please come along with me on my steamboat(?)!

Oh! Do not be afraid, please just open your wonderful country for a little while~★

Perry-san has been described as a cheerful man who likes to relax, but he is a resolute leader. He's shown to be loud-mouthed and shouts most of what he says.

Perry-san is an aged, intense looking man with curly orange hair and blue eyes. He dresses in blue and gold colonial attire and blue sandals, although he's not wearing any pants other than red and white striped boxers. On his head he wears a miniature black boat. Most of the time, the black boat is all that is visible of Perry-san as the rest of him is submerged underwater. He's taller than the people who appear in his win animation.

In his 2nd player palette, he wears orange clothing and he has red hair and brown eyes. The black boat on his head becomes blue. His boxers become green and white.

Perry-san has a Japanese quality of his clothing, which includes a light blue kimono with a blue haori, red-white-striped socks, a red small obi, and white geta. His black boat is decorated by a cherry blossom bonsai, and uses a salmon-pink-yellow traditional hand fan.

Hello! Are you enjoying springtime in Japan~? I'm enjoying my first hanami with a bonsai tree, a sake cup, and hanami dango★ It's a flawless hanami STYLE! 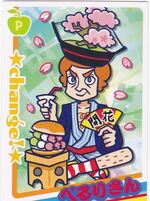 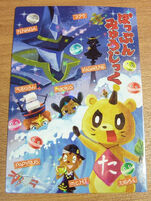 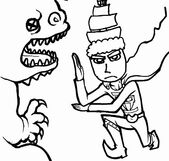