"After this long symbolic journey through sound, we have finally reached the last part of out trip of Resort Anthem." ...so I had to think of some images that would convey this feeling.

If we considered this an "endpoint", but then took another step forward, we could forget about all our old memories, and begin at a new "starting point".

This has been a good journey! 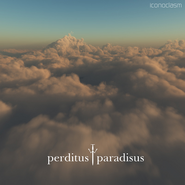