Seeing the smiles of audiences from the stage

Pelo is one of the characters from Pop'n Music 17 THE MOVIE.

世界中のステージを回るエンターテイナー。
歌もダンスもライブも演劇も、
あらゆる楽しさを学ぶのに夢中なんだって。
An entertainer going to stages all over the world.
Songs, dance, live, theater,
He always has fun learning, engrossed in it, even.[1]

Pelo is a modern-day pierrot with short red hair. He wears white makeup that covers his whole face, painting on a blue star, teardrop and thick red lipstick. His outfit consists of a white shirt that exposes his belly, a red tie with a white diamond pattern, pink pantaloons with suspenders tied over his shoulder, pink and blue striped socks and large brown shoes. Pelo wears a black hat that obscures his matching eyes, and has a checkered purple and white pattern.

Pelo has a 2P recoloring, giving him purple marks on his face, along with blue hair, eyes, and earrings. His shirt is lemon yellow, and his pants and hat are orange. He has blue-violet shoes and a bracelet, along with the lemon yellow highlights on his hat that matches his shirt and microphone. Pelo also has white socks with deep blue stripes.

Pelo makes a cameo in Lill's FEVER! and Lose animation in Pop'n Music: Usagi to Neko to Shounen no Yume.

Pelo (ペロ, Pero?) is a corruption of ピエロ (piero), the Japanese pronunciation for pierrot. 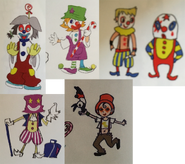