Music of the stars

Ookami-Boy is one of the characters from Pop'n Music 15 ADVENTURE.

「ほんとうのこと」は目を閉じれば見えるのに。
ねぇ、ぼくの歌が聞こえるかい？
"The truth" is shown when you close your eyes.
Hey, can you hear my song?

Ookami-Boy is a young boy wearing a bright yellow wolf costume with a red scarf, an orange patch on his right leg, and a white bandage on the left of his chest. He's often shown with a blue guitar. As reveled in his Lose, FEVER!, and Win animations, he has short blond hair with straight bangs and blue eyes. In his Lose animation he wears a simple nightgown with slippers.

Ookami-Boy's 2P changes his costume to light gray, his guitar to dark gray, and his scarf is black. His face is shadowed and hidden. It's used in both Little prayer in Pop'n Music portable and ストレイ・マーチ in Pop'n Music Sunny Park.

His 3P is mostly similar to his 2P, although colored in a light shade of blue instead of gray. It appears only in 少年リップルズ from Pop'n Music 19 TUNE STREET.

Ookami-Boy first appeared in the video for the original Prince on a star song in beatmania IIDX, with his appearance being similar to that of his 2P.

He makes another cameo in the music video for Homesick Pt.2&3 in GUITARFREAKS & drummania.

Pop'n Music portable:
深い黒い夜の中、遠いところでずっとひとりぼっちで歌っている男の子。
ねぇ、ぼくの歌が聞こえるかい？
In the deep black night, the boy sings alone in a far-away place.
Hey, can you hear my song?

Ookami-Boy translates to "wolf boy", referring to his costume. 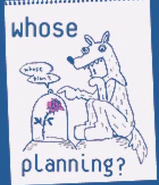