Pop'n Music Wiki
Register
Don't have an account?
Sign In
Advertisement
in: Characters, Females, Others,
and 4 more

Ninjin is one of the characters from Pop'n Music 20 fantasia.

いつもご本を読んでいるおんなのこ。
今日もくるくるぴょんぴょん。元気にせかいを見下します。
A girl who is always reading books.
Today as well, she hops and spins round and round, cheerfully looking down upon the world.

Ninjin is a living doll who loves fairy tales and chocolate. She has a childlike personality and way of speaking, and she thinks she is above other people in some way.

I called up a lovely girl
from the very scary-feeling book of Crimm's Tales.

Anyway, this is a powerful song...
I wondered how to convert the feeling of the "I quit being human~♪ (jyan♪)" at the end into a character.
Even though I was confronting Asaki World again this time,
it took a great amount of mental strength.
But since I made a good character it cancels out the difficulty I had. Bingo.

Asaki-san gave me the name.
I was impressed by his fiendish taste as always.

Ninjin-chan is a "picture-perfect pretty girl".
It seems that she thinks that everyone around her are fakes and scarecrows
and that she's the only really human being.
But is that the truth??

Ninjin resembles a traditional hina doll with paper-white skin. The pupils in her black eyes are four-pointed stars, and she has rosy cheeks. Her cheery expression never changes. She has purple hair with straight bangs and two looped braids, and on top of her head she wears a a large yellow bow. She wears a kimono patterned with red and white arrows, with a yellow obi around her waist. Over this she wears a black haori with a white scalloped collar. She wears black shoes or socks on her feet.

Her 2P color scheme gives her blue eyes and strawberry blonde hair. Her kimono is pale blue and white, while her obi and bow are a pale red. Her haori is dark gray, and her footwear is dark red.

Ninjin appears on Dooken@Canvassing Party, a rare card from the Pop'n Music Lapistoria Card Collection. Like the rest of the characters on this card, Ninjin wears a black gothic lolita-style dress with white lace trim. Dots of various bright colors adorn her hair and dress. The bow on her head is decorated with three donuts: blue, pink, and yellow.

Pop'n Music 20 fantasia card "The Beginning of Crimm's Tales~", featuring Ninjin along with Tent-Kant, Zina, Kanta and Kirico on a pop'n music card. 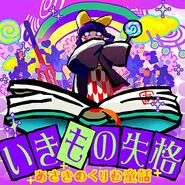 Ninjin on top of the cabinet