Nicolas is one of the characters from Pop'n Music Lapistoria. He is a main, unlockable character in Retsu's story, After School Laboratory (放課後実験室, Houkago jikken-shitsu?), and wields a yellow, pear-shaped lapis.

病弱な体に負けず研究熱心な彼は
学園の天使とも呼ばれてるんだって。
でもおばあちゃん直伝の調合レシピはちょっぴりあやしげ・・？
He's always eager to study without yielding to his sickly body
He's also known as the angel of the school.
But the recipes that his grandmother hand him seem a little complicated.

Nicolas is described as a sickly young boy, with pale skin, light golden yellow eyes, and white hair with a tint of blue. He wears a white, navy blue brimmed beret with two hanging beads. His parka is similar in color to his beret, and worn over white shirt with a black tie, a blue-gray midsection and sleeves, blue-gray pants, and black shoes. A leaf pin adorns the left side of his parka.

Nicolas' 2P palette recolors his hat and parka light green, and the lining on both is teal. His uniform and leaf pin are light brown, and his pants are a darker shade. His hair is light blond and his eyes are bright green.

In the Lapistoria card collection, Nicolas' change card gives him new attire, consisting of a light brown cap with a leaf pin, tan pants and a navy blue coat worn over a light brown buttoned sweater, a blue argyle sweater and a yellow collared shirt. He is also shown with a tan backpack filled with flowers, a brown tote bag and a magnifying glass. 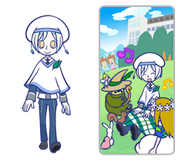 Nicolas' 2P palette
Add a photo to this gallery

Retrieved from "https://popnmusic.fandom.com/wiki/Nicolas?oldid=73165"
Community content is available under CC-BY-SA unless otherwise noted.