An array of things that shouldn't be said here

Guys who never join in (to dance)

Nickey is one of the characters from Pop'n Music 11.


What's up with them? The overflowing youth did not hold back, rhymes written with uneasiness and so on circumstances there, YO.
Kindly check it.

Nickey is an American college student of Japanese descent who now lives in Japan and aspires to be a successful rapper/DJ.

Nickey is a young adult who wears a black beanie, headphones, and sunglasses with a bright orange jumpsuit and a black shirt underneath. His boots are black with yellow laces and he wields a gold chained necklace with a male gender symbol hanging on his neck. He carries around an old style boombox. Nickey's hair color is blonde when his beanie is removed.

Nickey wears a dark gray beanie, black sunglasses, and a hot pink hoodie with a male gender symbol design on it. Over the hoodie he wears a white doctor coat with a female gender symbol, and matching white pants. His shoes are black with grey soles and his headphones are pink with a black trim. He carries a boombox and a white wand with a pink heart at the tip.

本日のなりたい職業第1位☆ 保健体育のティーチャー☆とシャイなBOYのダラダラ妄想フィーバーin・ポップン学園～
The occupation first place☆ that today, he wants to become a Japanese health physical educator. The delusion of a shy BOY splits open in Pop'n school.

Phase 2
Has a hidden song (Mixturenpon) 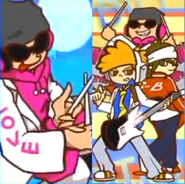 Nickey as he appears in DTO's FEVER Win animation in Pop'n Music Lapistoria. 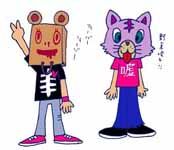 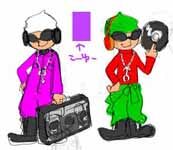