Navi-kun is Mimi and Nyami's main mascot, making his appearance in Pop'n Music: Usagi to Neko to Shounen no Yume. He is currently an unplayable character for this game, but as of March 29, 2017, the name Navi was officially given to himself as a playable character.

Nice to meet you! I'm Navi.
Let's travel around the Pop'n World together♪

Finally my song was created for Navi~! Yay! Mimi and Nyami were in charge of the Usaneko theme song "Flaxen colors that bond dreams", so it was a painful feeling, if you thought that Navi songs were too painful for such an adorable song!

Like a march of toys, but not just full of energy, there is an image of a little dreamy color that seems not to be sepia.

Knowing how he has a lot of picture diaries in navigation trips, I love the way he's adorable and rich I think that it is perfect for the image of this song and I am making a little bit of the animation design.

I wrote "Mimi and Nyami wish they could fly" because, it's like bringing little robots together in a sentence in a picture diary.

It is my favorite that the neutral animation marches whilst flying is able to be done to a full-ness. Now, I decided to rush to the back design of Little Navi; I haven't decided until I draw this anime.

I wanted to include a new growth pattern in the winning anime, but I gave up too many people.

Please... Please raise it and see how it feels.

Little Navi and Onavi, please be thankful to me!

Navi-kun is a small robot known for his blue, piercing eyes, and walnut hair with pink tips. He wears a metallic, long-sleeved costume with velvet red portions, dark gray highlights and a gold, metallic lower piece that resembles a belt. He also has platinum shoes and a propeller on his head.

In his human form, his metallic outfit is normal and he keeps his metallic headband, where his hair is combed into three parts.

Navi can develop into five forms, depending on what kind of songs you play. His red variant has a cheerful look with a seemingly hot temper. His pink variant has a timid, cute look with a curvy, neat hairstyle. The blue variant has his hair style, but his personality seems to be a calm, serious manner. The green variant has this handsome, sexy look having a slightly curly hairstyle with its part that acts like a ponytail. Last but not least, the dark purple variant is a joyless, edgy personality with droopy, neat hair. 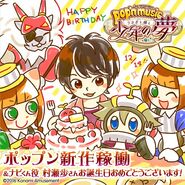 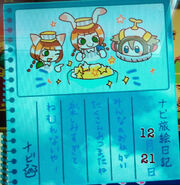