Raisins (because they're evil)

NaN is one of the characters from Pop'n Music 9.

NaN is an "object head" with a curry pot as her head who has been kneading the same piece of dough for thousands of years.

NaN wears a fuchsia bikini top with golden straps and golden frills lining the bottom. She wears a gold necklace in multiple rings around her neck, and 3 gold bracelets in each hand. Her pants are fuchsia which fades into purple, and so is her scarf, which is tied around her waist. She has fuchsia pointed shoes. She is wearing pink lipstick and rose eye shadow.

NaN has a pun-based name; while "NaN" is a computer term meaning "not a number", it was chosen as the character's name due to it being pronounced identically to the word "naan", a type of bread from India. In addition, it could also be a play on the Japanese word "nan" meaning "what". 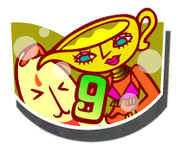 NaN in one of Karli's doodles on the pop'n music PARTY! page.

NaN, Smile and an unknown mushroom character on a eAmusement card.

NaN in a music video

NaN as she appeared in the Pop'n Music 9 website. 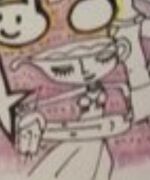