Mr. Fukumimi is a middle-aged man with plain black hair and eyes, and simple glasses. He wears a bright pink suit with a white collar shirt, blue tie, and brown dress shoes.

In his 2P he's given a darker complexion, though his hair and eyes keep their color. His suit is now light gray with black shoes and a yellow-green tie. 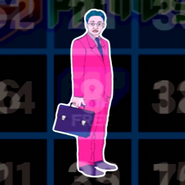 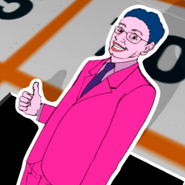