Mr. B. Bone is one of the characters from Pop'n Music 8. He originates from another BEMANI series, GITADORA.

ギターのことならＢ・ボーン先生に何でもおまかせ！
誰にでも優しくかつアツク教えてくれちゃうらしいぞ！
Leave anything to B-Bone and his guitar!
It seems that he is kind and friendly to everyone he teaches.

Mr. B. Bone is an kind, legendary undead guitarist who's earned the name of "teacher" from his tutorials. His full name is Back Bone, or "Bag Bone." Out of bad luck he died, but his passion was immortal, making his guitar emerge from the grave on the night of Halloween; he showed up in front of everyone in a paper bag. His real face is "an eternal mystery," and a popular theory is him being very pretty underneath the bag. Ever since, he has caught the attention of young children.

He has similar movements to the forest policeman who appeared in P6... I can't advance. The charm point, I still wonder how the hair moves?

Mr. B. Bone takes the form of a short skeleton wearing a paper bag with a small, orange tuft of hair adorning the top. He dresses in a red shirt with chipped sleeves, jeans and black boots and spiked bracelets. B. Bone's guitar is red-colored with a yellow headstock.

His 2P version have him recolored in Purple, it is shown in Namara Jazz.

言わずと知れたギタドラマスコットキャラのひとり。
初代GUITARFREAKSから登場しており、
ゲーム中でプレー方法などを教えてくれていたことから
「先生」と呼ばれて親しまれている。
てっぺんから出てる毛は一部に過ぎず、
ほんとはムッシュ・.かま○つもまっつぁおなほどフッサフサらしい。
しかも素顔は美少女という噂も・・・
体は骨なのに。
Needless to say, he's the lone mascot of Gitadora.
It has emerged from primary GUITARFREAKS.
From the fact that he had taught you methods on how to play the game
It's a popular idea to refer to him as a "teacher."
The hair coming out from the top is only partial,
Really seems Monsieur. Bite ○ I gathered about something nice.
There are also popular rumors that he's a beautiful girl...
Even though the body's bone.

神業なギターテクを持ちながら、この世を去ってしまった伝説のギタリスト。
ギタリストを志すキッズを見ると話しかけたくなるのだ！
While having a supernatural guitar talent, a legendary guitarist had left this world.
Children will want to see and talk to the aspiring guitarist!

ギター担当の骨先生。
普段からオトベアを飼いたいと思っている。
得意のギターリフで勝負に挑む。
Bone teacher in charge of the guitar.
Wants a domesticated Otobear on a daily basis.
Challenges his customers to compete on guitar riffs.

Mr. B. Bone in GuitarFreaks 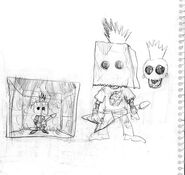 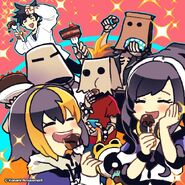 Mr. B. Bone with Smoke, Mimi, ALT, and Concierge.

B. Bone on the Bemani category icon for Pop'n Music 17 THE MOVIE