Moe is one of the CS characters from Pop'n Music 5.

本人はやる気十分！なんだけど、このごろ
がんばりすぎて咽を痛めているみたい？
A new idol that recently debuted that's full of will!


She's working so hard nowadays, but could it be that she's damaging her throat because of it?

Moe is a fair-skinned girl with simple blue eyes and dark lavender hair. Her hair is set up with a wide and wild style with a dark pink head band that matches her large and round earrings, a bow on her left wrist, and her flats. Moe wears a light yellow dress with a large, pink satin bow on the back of her waist.

Moe's 2P color palette re-colored her hair red, her eyes dark teal, and her dress dark teal. Her flats are violet, matching her headband and wristband, while her satin bow on her back is matching her dress from her original palette.

Moe receives a new color palette, such as brown eyes and green hair. Her head band, earrings, bow, and flats are changed to yellow. Moe's dress is white, but the bow remains the same color as the original color palette. This is her 1P in Study, but it's her general 3P.

Moe's 2P palette in Study (general 4P) gives her a pink dress with a yellow bow, and red accessories; her earrings, smaller bow, headband and flats. Her hair is cyan, and her eyes are a dark teal.

In the URA version, Moe's hair color is yellow, instead of green. The head band, bow, and flats keep this process until the color cerulean. Moe's dress is lightly blue, almost shares a cerulean color, and the satin bow is closely tinted to a lighter version of a pink color. This is her 3P (general 5P). 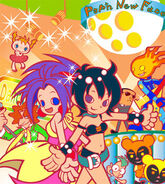