Together with my big brother!

Minit's , who is Timer's little sister, is one of the characters from Pop'n Music 14 FEVER!.

ラブリとかわいいなお年頃☆
ぴょん、ぴょん！ミニッツとみんな、いっしょにおどっちゃお～！
She is the age that is lovely and cute☆
Boing, boing! Minit's and everyone, let's dance together~!

Minit's is Timer's little sister, who is happy-go-lucky, bubbly and joyful. She acts like a crybaby sometimes, but gets a sweet tooth by carrying all sorts of imaginations about candies, cakes and other kinds of desserts.

Always on the move, Minit's can hear happy music wherever she goes. She’s a great dancer who can teach everyone, by making up crazy dance routines. Her optimism is curious and she always sees big possibilities in everything, but she won't know what her full secret is when she's a little older.

In Pop'n Music Lapistoria, she wields a pink, heart-shaped lapis.

Minit's appeared as a young girl, where she has a blue eye colour with a slight darker hue, cerulean hair, revealing to be short and puffy, while her bangs and strands are sticking out of her hood, which is based off on a rabbit with a dark pink colour that has strange looking eyes. She also has on a white dress with an oval in the center, hot pink knee-high socks, booties and gloves with yellow bangles that are matched. She accessorizes herself with a rabbit-like pochette that is light pink.

In her 2P color palette, Minit's costume changes into white and baby blue, especially her hair. The rings remain yellow, but the oval on her dress also changes to yellow and her pochette in white.

Minit's attire almost bears a bit of similarity of the debut, but her hood is highlighted to light pink, while her hair and eyes are tinted in a lighter colour, where her gloves and slippers are no longer rabbit themed. There is a small cake prop with a rosy-colored heart on top of her head. Minit's dress consists of white with pale yellow trim and a strawberry inspired detail on the sleeves and collar. Her gloves and shorts are marshmallow pink, and her slippers are deep magenta with white fluffy trim. Her original palette is reused in よりみち♥みすてりあっ from Pop'n Music éclale.

Minit's 2P re-coloring consists of her entire outfit colored in a chocolate brown hue and she gains brown tights. Her hair is blonde, while her eye color is cyan. The rest of her highlights and accessories are colored mint and blonde.

Her special 3P palette changes her clothing to light yellow and baby blue. Her hair and tights are bright red while the cake prop is purple and white and decorated with a red heart.

Minit's now wears a school uniform, consisting of a white shirt worn under a yellow vest with a pink bow-tie, a short grey skirt with white lining, plus a pair of pink and white striped stockings. Underneath her skirt, she wears white bloomers, also her boots, with yellow ankle ruffles, and backpack are red. She has regained some attire from her debut, including her pink rabbit hood with a nose at the top, has white hearts in its ears and pink gloves with yellow wrist ruffles. In her Win animation, she transforms her school uniform into the cutest outfit ever. Her hood reshapes into a wider hat, and she gains a cyan dress worn over a poncho with a slightly darker-colored bow, matching each one on her dress and shoes. She also has a pair of white-cyan-striped socks to match as well.

Minit's' 2P has blonde hair, lavender eyes, and gives her a mostly purple, black colour scheme. Her vest is dark gray with a black shirt, her rabbit hood, and tie are both purple, while her backpack and shoes are a shade of lavender. Her skirt becomes white with a gray lining, while her gloves share the same color as her hair. Her stockings are striped black and purple. In the palette, she wields a purple heart-shaped lapis.

Minit's is shown with a white raincoat with a rabbit theme on her hood and at the chest. This is a temporary appearance in Timer's Lose animation in Cyber Digibeat.

Minit's also was alongside with Timer, but she only appeared on his Great animation in Pop'n Music éclale. Her costume consists of a pale, vibrant pink dress with yellow highlights, a baby blue sash with a red sphere, white long gloves, some turquoise short gloves and stockings matching her hair. She also wears pink boots with white ankle bangles on them. Her hood has white tips on its ears, and on top of it there's a cake hat that is vanilla flavored cake with a light strawberry icing around it, also having a red cherry on top.

Her 2P has golden hair, purple eyes and wears a pastel, gothic theme of white, purple and yellow.

Pop'n Music Sunny Park:
腹ペコなんてダメダメ～＞＜
女の子にひつようなのは、あま～いケーキとチョコレート！
I'm hungry, why that's a no no ~ ><
A girl needs it all, sweets ~ cake and chocolate!

2P Lose
Add a photo to this gallery 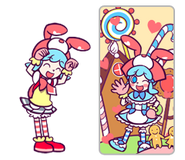 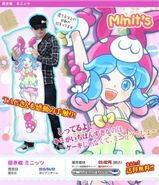 Minit's with Timer,Carol,Chocky,Mimi,Usao-kun and Lyra on a Pop'n Music Tune Street card. 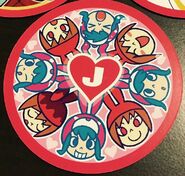