Miho is one of the characters from Pop'n Music 20 fantasia.

音楽を通じてどんどん友達が増えて行くのが楽しくて、
休み時間も放課後もバンド三昧のみほちゃん。
友達の恋愛の相談を受けて歌詞にのせたりするけれど、本人はまだ音楽の方が楽しいみたい？
It's fun to make more and more friends through music,
Miho-chan's band is awesome both on holidays and after school.
She received her friend's romance consolation and put it in the lyrics, but does the person himself seem to enjoy the music more?

Miho is a talented student who is interested in rock' n roll!

Miho is a girl with dark grey eyes and short, olive-colored hair. Her outfit is a school uniform with a black jacket, a maroon neck tie and miniskirt, white boots, and stockings that hold a black-white stripe pattern. She frequently wields a red guitar. Her original palette is frequently confirmed in Digital Rock from Pop'n Music Sunny Park, and そこに或るヒカリ from Pop'n Music Lapistoria. 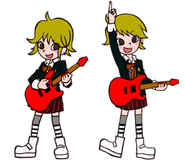