Michiru, whose full name is Michiru Sakura, is one of the characters from Pop'n Music Lapistoria. He wields a red, diamond-shaped lapis.

歌にダンスにマルチな活動で人気絶頂のボーイズグループ「MesiA」のリーダーは、
元気いっぱいのアイツ！
Leader of the most popular multi-activity boys group "MesiA" who dance to their songs,
he's a very peppy guy!

Michiru is the leader of the boys quintet, MesiA. Not quite much is known about him, but he's full of energy and is always cheerful. Despite his busyness between his idol activities and academic time, he also enjoys sleeping, which is why he loves collecting pillows.

Michiru has berry-colored eyes and pink hair that is tied into a small and low ponytail with a white bow. He wears a costume that includes a white sleeveless shirt with gray bottom lining and yellow clips, a light blue cloth tied around his waist, white finger-cut gloves with pink highlights, white pants, and dark gray boots. There is a gray sleeve located on his right arm, and a strap on his left. Michiru sports a pink, plaid vest that is decorated in gold frills and a round brooch with a pink center. His FEVER WIN animation shows that he wears light pink pajamas.

Michiru's 2P gives him tan skin and light blue hair and eyes. His plaid top is now green, blue, and white, and the decorations on it are light blue and silver. His pants remain white, and the other pink parts of his outfit are now teal.

Michiru appears in the Pop'n Music Lapistoria Card Collection wearing an elaborate green and blue patterned crop top that hangs off one shoulder and is connected to a gold wristband on the other. He has a black sleeve on his right arm and brown glove on his left, while the top part of the shirt has a hanging brown and purple fringe, brown collar, and a brown band on the right arm. His black top hat is held to the side and decorated with a purple sash and a white beaded string. His pants are a light brown with darker stripes and worn with brown boots and a gold belt buckle. His hair is tied into three small ponytails and he wears purple eyeshadow.

Michiru makes another appearance on one of the Lapistoria Rare Cards, pictured with the rest of the members of MesiA. His hair is tied with a red and gold bow, and he wears a white coat with gold lining, black fur trim, and shoulder pads. The trim of his coat is decorated with a gold brooch with a red gem. His gloves are also white with red and gold trim, and he has a red vest with a white shirt under his coat.

He, along with the other three members of MesiA and Paku, make appearances on Ace's FEVER!, Win, and Lose animations. His new costume is a light yellow torse with a gray plaid cape overlapping it, light yellow shoulder pads and a pink star located on his left side. There is a velvet drape located on his right shoulder. Michiru wears a pair of white gloves with velvet accents and white pants. His 2P palette brings back his original 2P scheme from Lapistoria. 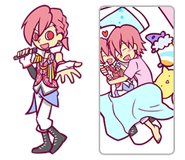