Making a new guitar! Of course I performed☆

銀河で話題！？のマーチングバンド出身の個性派ギタリスト☆
派手好きでスピード狂な変わり者だけど、ギターテクはかなりのものなんだって！
The topic of the Milky Way!? A unique type of guitarist of marching band origin☆
An extravagant and speedy oddball; however, his guitar technology is considerably useful!

Meteor is described as being somewhat strange, and served as a part of his marching band's color guard. After seeing a high speed guitar performance, he was inspired to learn it as well. Since then he's always learning new techniques and has improved quite a bit from practice, but due to his fascination with speed and appearing flashy, his technique is said to be a little violent.

Meteor is a tall man with white skin and blue eyes with four-pointed star irises on each of them. He also has yellow hair with his long, right bang combed into a thick curve with four jewels: the colors of red, blue, orange and green. His main attire is a black, marching band-inspired costume, along with matching boots with platinum, yellow accents and white finger-cut gloves. His cap has a blue Pop-kun emblem on the center with white and blue transparent strands. He wields a rocket-inspired guitar, printing the word "MAD" on the right wing. On the back of his cape is a gradient of blue, purple and red with stars, depicting the space background.

Meteor's 2P gives him silvery gray hair, and his entire outfit a set of blues: a gradient of cyan, light blue, and orchid, yellow accents on a few parts, a silver star, and platinum blue around.

Meteor's appearance in this theme as as the same as his previous theme. He was given an updated look to match the game's design. His guitar seems to be slightly smaller in size, and the buttons on his uniform are no longer visible.

This design has no 2P palette. 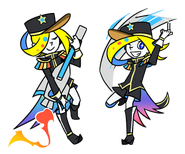