Practice fencing; Someday I'll be a knight in the castle!

Freckles and clothes that are difficult to move!

故郷を飛び出して旅立った、おてんばエルフの女の子。
都の剣術大会で優勝して、お城の騎士になるのが夢なんだって！
A tomboyish, elf girl who journeyed out to fly from her hometown.
Creating her overall victory in a capital fencing tournament, she dreams to become a castle knight!

Melissa is an elf, who seems to be tomboyish. Tired of the stereotypes attached to elf women, she left her hometown to travel, hoping to dream about becoming one of the castle knights someday, whilst having exciting adventures.

Melissa is primarily known for her stereotypical, RPG fantasy elfin appearance. She is born with sky blue eyes and yellow-blonde hair, stylized in a long, thigh-length braid, hanging to her left side. Her costume is a light-yellow themed, two-piece quoth dark gold accents: a thick bombshell tube, and a long skirt that is normally tied into a shorter version with a satin bow, making Melissa run freely. She also has light brown sandals, along with a matching pair of arm warmers, a dark yellow left thigh piece and right strap piece, and a leaf-decorated cape with white four-petal flowers. She mainly carries her rapier that shares her colors, and two rose accessories with white strands: one is red and the other is mint green.

Melissa's 2P palette gives her a dark brown complexion, powder blue eyes, and pale light pink hair. Her costume is colored with a very light yellow color and palish-gray purple accents, along with her dark plum purple sandals. Melissa's rapier, thigh piece, cape, and roses all share the colors of her outfit. 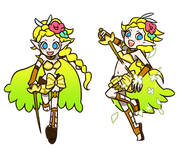