People who are mean to onii-san

Megumi is one of the characters of Pop'n Music 3. Her full name is Megumi Hayakawa.

小学校に通うおしゃまな女の子。近所のお兄さんに片思い中…。早く大人になりたい！
ってお月様にお願いしたら戦うお姉さんに変身する力を貰っちゃった★これでお兄さんを守ってあげるっハート♥
A precocious elementary school girl with a one-sided crush on a young man in the neighborhood...I want to be an adult already!
She can ask for the power of the moon to turn into an older woman that fights★ ready to defend him with all of her heart♥

Megumi is an elementary school student with a crush on a boy older than herself in her neighborhood (referred to as "onii-san"). She develops a rivalry with Hitomi, a middle school student who also likes him. She has the ability to transform into "Magical Megu" by using the power of her Beauty Tambourine, although its' powers are normally sealed by her hairpin.

Megumi appears as a young girl with plain black eyes and medium length brown hair, decorated with a pink flower pin. Her attire consists of a plain magenta dress with long sleeves and a white collar. Her shoes match her dress color, and she has white socks with a yellow stripe. she wields a pink heart-shaped tambourine. In her Magical Meg persona, she appears much older and her hair becomes blue and reaches her knees. She dons a white vest with a pink tie showing her stomach and cleavage and matching white gloves and boots. She also has pink stockings with a black bikini, and her hairpin gains a white wing design.

Her 2P palette simply gives her blonde hair and an orange dress with matching shoes. As Magical Meg her hair is now green and her stockings are magenta, while the rest remains the same color.

2P Lose
Add a photo to this gallery 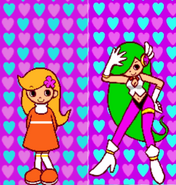