At the foot of Chiang Dao

Dancing in rhythm to music

Those who walk into the sacred world

Mata Hari is one of the characters from Pop'n Music 20 fantasia.


Dancing down following the magical sound of the flute,


The shine that is like carrying the sun, with no mistake it is a nation!

Offering a dance to gods at the foot of a sacred mountain, it is said that only those that have received approval can change form into the sacred bird… It’s a spiritual character with Nekomata blood, but while I was thinking if I just showed the cool part then it wouldn’t be good, I unintentionally made him fell flat to the ground in his miss animation.

The phrase “Something Nation” started from designer camp and was received well, so personally speaking in my heart it receives the gold medal of Best Title of Quest. Since young I was taught if it has nation in the title then it has to be Nekomata and I have been living believing that, but as the wave of time goes finally nation has become something common, huh… Although that way is also a good nation. From here on is that one nation, clearly distinguishable from this nation, I’ve been thinking of living the nation live in its full glory! Come with me everyone~

Mata Hari wears a black sleeveless top with a green, gold trimmed collar, gold bracers, and white pants tied at the end with gold bands. Over his pants is a long white cloth with yellow trim, connected to a green belt. His face is mostly covered by a large, ornate headdress. The head part is dark green with red eyes and yellow horns, and two red pieces hang on both sides of Mata Hari's face. The rest of his headdress has lime green and white fur around the shoulders and down his back, with red and yellow tassels at the end.

Mata Hari's 2P color gives him completely white skin, as well as removing his shirt. The gold parts of his outfit are now silver, and the rest of his attire shifts in shades of blue and teal. This palette is used for Nomadic Nation 2.

Mata Hari receives new attire in his change card, now wearing black pants with a blue cloth and a gold belt with two long streamers. His collar is black with light blue trim and a gold choker, and his headdress has a golden beak with three yellow horns, blue and white wings, and two light blue pieces framing his face. The back extends into two long blue tails with yellow tassels on each. Mata Hari also wears large blue, white, and gold shoulder pads resembling wings with blue-yellow fur underneath each.

Matahari is the Indonesian word for sun. 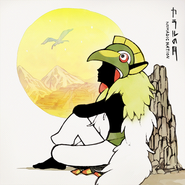 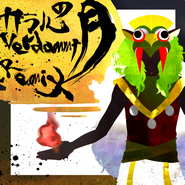