Marin is one of the characters from Pop'n Music 19 TUNE STREET.

元気で明るいブラスバンド部の女の子。担当はマリンバ！
でもマレットで色んな物を叩いて出る音にもワクワクしちゃう！
A lively and energetic girl from the brass band. She is responsible for the marimba!
But she is excited to hit various things with her mallets to hear the sounds they make!

Marin is the most energetic member of her school band. This percussionist is never seen without her mallets, and is most fond of the marimba. She takes pride in her ability to play the marimba, but sometimes gets a bit too carried away and hits things other than her trusty marimba with her mallets...

She is the brass band section affiliation marimba player Marin-chan.

She is a high school girl of the energetic brass band section, with an image
of fresh feelings, when she was first drawn with twin tails.
This drawing is my favorite somehow, if the energetic high school girl's image
of her ponytail was still hard to discard anyways,
and one of the twintails that I erased with my eraser is a design origin.

Actually, Marin is a truthful Pop'n character there, and part of the same school's brass band.
Try to look all of the means, please!

Marin has chocolate brown eyes and a matching pigtail, with some of her hair sticking out. She wears a black headband and a school uniform, consisting of a white polo shirt, a light yellow vest, a blue plaid skirt with a matching bow tie, red socks, and white short boots with a red section. Marin has a fuchsia wrist band on her left wrist and carries a set of green mallets. Her appearance is used again in じょいふる from the same game, 桜色のメロディー from Pop'n Music éclale, and 放課後コンチェルティーノ～私だけの部室狂騒曲 from Pop'n Music peace.

Her 2P palette recolors Marin's hair cyan blue and her eyes teal, excluding her headband, polo shirt, and high tops (the high tops' section is baby blue though). Her vest and knee-highs are darkened black, and her bow tie and skirt are recolored light orange. The round tips of Marin's mallets are colored fuchsia.

Marin makes an appearance in Ayumu's Win animation in Pop'n Music Sunny Park, wearing a costume similar hers, albeit her skirt's section is slightly wider and bigger than Ayumu's.

Ayumu's 2P color palette reverts back to Marin's 2P coloring scheme, but her headband is white, and the round tips of her mallets are light yellow.

Marin's name was derived from the Japanese pronunciation of marimba (マリンバ). 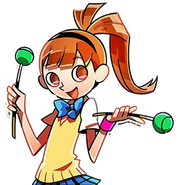