On topology of that night

The equation of Adam and Eve

Madoka is one of the characters from Pop'n Music Lapistoria. She is a main, unlockable character in Retsu's story, The Secret of the Principal's Office? (校長室の秘密?, Kouchou-shitsu no himitsu??), and wields a purple, heart-shaped lapis.

オトナのヒミツ、教えてあ・げ・る…
教科書にはない、アナタを惑わすトポロジー
The secret of adults, I will teach you...
It's not in a textbook, topology can deceive you.

Madoka is a flirtatious, sexy woman with an attractive, sassy look. She is very popular among both students and teachers despite all the students who have been annoyed by her flirting.

Despite of her busty looks, Madoka can be serious sometimes. As she can sense when the Lapistoria world is about to crack, and inform her students to stay calm, indicating that she deeply cares about them more than herself.

Madoka is shown as a busty woman with brown curly hair kept in a ponytail, dark teal eyes with lavender eyeshadow, and a beauty mark under her lip. She wears a short, low-cut dark purple top with black cuffs and a black lapels, and a black tie is tucked between her cleavage. Her mini skirt matches her shirt in color, with slits on each side and is worn with black stockings, heels, and a garter belt.

Her 2P gives her dark skin, lavender-blue hair, white eyeshadow, and violet eyes. The purple parts of her outfit become light blue, and the black parts are a darker blue. 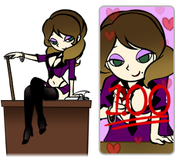 Madoka's 2P palette
Add a photo to this gallery