Guys roughening up the city!

Machiko is one of the characters from Pop'n Music 17 THE MOVIE.

Last time, we've heard that Taako depended on someone else to do her job, and had been sleeping when Machiko finally arrived!
Machiko was born in downtown Osaka. Maria is also living there, a strong woman who would even beat scoundrels.
The city of crows and cats all love Machiko.
Machiko's name derives from "Machiko wrap," although the check pattern of this cloth
Was not very easy to draw moving in the animations;
I would have gave up while making it if it could be plain instead, I'd be surprised if I had completed it.
I'm glad I checked and didn't give up! And, we are satisfied.

If you own any red checker patterned cloth, wind it around your head.
Look, you're Machiko★

Machiko is a brunette, long-haired woman who wears eyeshadow and a red checker-pattern shawl around her head. She dons a beige coat, green skirt, grey tights and white shoes.

Machiko has a 2P palette that gives her blonde yellow hair. Her clothes are now in a pink/purple variant": her shawl is purple, her coat is pale velvet, her dress is light pink, and her boots is regular velvet.

Machiko's name is derived from the "Machiko winding" from 1953, where Japanese women imitated Keiko Kishi and wound shawls around their heads. 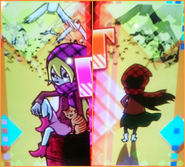