Lotte is one of the CS characters from Pop'n Music 13 CARNIVAL and the second player of Pop'n Music 10. She was separated by Ratte by the Broom House.

一粒だけ残った
約束の欠片
いつ彼方はとりにくるの？
One grain only remained
The fragment of the promise
When will I come to take the other way?

Lotte is Ratte's twin sister. She was separated by her with two unspecific guardians, their aunt and uncle. Lotte doesn't even know how she took care of Kanta, a mysterious and gothic stuffed animal.

Lotte is very analogous to Ratte, but she is shown to have mahogany-colored eyes, and is described to be the "dark" counterpart. Lotte wears a top that a caption printed as "LOVE", while she sports a black mini skirt and a purple bow on her back. Lotte wears grey pantyholes and black flats at the end. Lotte has a deep pink hat on her head.

Although Lotte appears as Ratte's 2P character, she makes her new appearance with her own insert song. Lotte's outfit is a black babydoll shirt with grey stripes and armwarmers that ascend their colors from black to white. Lotte sports white pantyholes and pink heels, while her earrings are the identical color. Lotte wields a pink guitar with a lavender edge and a black section. This appearance is reused in Endless Moon -LUNA- from Pop'n Music éclale.

Lotte, along with Ratte make brief cameos on their own comic in Pop'n Music 16 PARTY♪, and they also come to Wu Sheng's comic from THE MOVIE.

In the Pop'n Music Sunny Park card collection, Lotte's Change Card pictures her to wear a black headband with demon horns and an ornament. Lotte dons a two-piece dress with hot pink and black hues, and wears a necktie. Underneath her skirt are sheath coverings, and on her back are a pair of small demon wings. She wears light pink stockings with pink shoes. Her face and hair features are still mistaken as her debut in HELLO! POP'N MUSIC.

HELLO! POP'N MUSIC:
わたし、ロッテっていうの
私についてこれるかしら？
I am named Lotte,
Are you coming with me?

Lotte with Ratte on the "Queens" poker chip 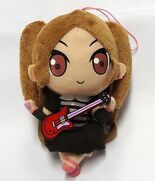 A card depicting Lotte and Ratte 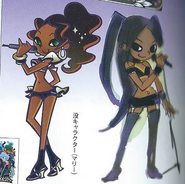 Lotte alongside Ratte from the Pop'n Music 16 PARTY site 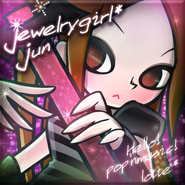