Places without any people

「占ったことが本当になるタロット」…
それは封じられた悪魔のいたずらなんだって、知ってた？
"What I predict with the tarot will come true"...
Did you know that was said to be the the trick used by this demon who was sealed away?

Loof is a demon who had been sealed in a tarot card long ago for using his magic for evil purposes. His fortune-telling was only accurate because he would make his own predictions come true to prank people. He may be more mischievous than actually malicious, but it seems he will not change his troublemaking ways even if he is punished.

Thank you very much for choosing me as the winner of the excellence award this time!
I'm honored to have my character accepted into a game which I have been playing for a long time.
"I dare PON-san and Akinari-san to make a song with this kind of atmosphere, I want to hear it!" That was my wish that served as the basis while I was coming up with the design and setting, so I was very happy when my character was selected for the C song.

Loof is a demon who was sealed away in a tarot long ago for using his magic for evil.
However, he still didn't learn his lesson. As a result of him repeatedly playing a trick where he caused the results of his fortune-telling to come true, before anyone knew it, tarot became known as something where what it predicts will really happen!
...With a story like that, I was thinking it would be nice if it could give the impression of an old occult folktale or rumor.
He probably laughs at the people who he made sport of with the results of his predictions.

Regarding the tarot theme, I got a gorgeous but somehow antique impression from éclale.
So from there, using thought association I went from "circus" to "clown", from "clown" to "fool", and finally from "fool" I arrived at "tarot".
There was quite a bit of association, but I believe my choices were made based on my initial impression of éclale, so I'm glad that it fits in well with the game.

Once again, thank you so much for adding Loof to the Pop'n World this time, and furthermore for creating a song that made the most of his themes!
Some of my personal tastes might be in there, but I'd be happy if you can appreciate them.
I'm looking forward to working with you from here on out!

Loof resembles a young man with pale white skin and bobbed silver hair. There is a cyan diamond pattern on the left side of his hair, and he wears a black and white diamond-patterned jester's cap on his head. His eyes are covered by a black mask decorated with three four-pointed stars, and he has no visible mouth. His costume consists of a black tailcoat over a cyan vest and baggy black pants. His clothes have cyan and dull gold patterns and accents. He wears black gloves over silver arm pieces and carries a deck of tarot cards. Although Loof received a new portrait, this appearance is used again for Blind in Pop'n Music peace.

In Loof's 2P palette, his hair is black with a purple pattern. The black parts of his outfit are changed to pastel yellow, the cyan parts are light purple, and the gold parts are now violet. His arm pieces are now black. 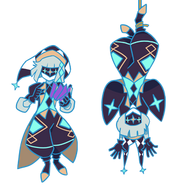