One, Ucchey, and Kenn (bandmates

Myself first, secondly my band members

Kivy is one of the characters from Pop'n Music 18 Sengoku Retsuden.


吉備丸！ヴィジュアルメイクのおかげで全然気づかれないんだって。
The vocal identity of the band went nationwide recently, the only son of the Japanese sweets shop MOMO,


Millet rounds! It's never noticed thanks to the visual makeup.

Kivy is the leader and vocalist of the band oni tai Z. He's shown to be rather vain, but still appreciative of his band members.

Kivy is shown with dark gray eyes and messy, hot pink hair with a long, single bang in the front. He wears a white headband with a pink "M", a green top under a pink top tied with brown bands, and a blue coat with a gray collar and gold trim. He has black, baggy pants worn with a studded belt and blue and pink studded shoes. He wears black eyeliner and nail polish, green earrings, and pink lipstick. Lastly, he carries a pink peach-like guitar with a green leaf design at the top.

Kivy's 2P palette shifts his hair into teal and green, while his eye color remains the same. The pink parts of his attire become teal, his pants pants become deep red, his coat is dark green with purple trim, and his shoes and headband are dark green as well. His top and earrings are a magenta hue, and his guitar is lavender. His eyeliner becomes blue.

Kivy makes cameos in Pop'n Music Sunny Park in One's FEVER!, Win, and FEVER! Win animations. He wears his usual attire, except for in One's FEVER! Win. He is shown with a vastly different appearance, wearing a simple white shirt, black pants, and gray shoes, as well as no makeup. His hair is dark magenta and worn straight, with his long bang noticeably missing.

In One's 2P palette, Kivy is given orange hair and most of his outfit becomes dark green in both his FEVER! and FEVER Win animations. In One's 3P however, Kivy's outfit is entirely monochrome and he has black hair in his FEVER!, while in his FEVER! Win he wears a dark blue shirt with black pants.

Kivy and his band are based on the Japanese folklore story Momotaro, the story of a small boy from a peach who befriends a talking dog, monkey, and pheasant using millet dumplings. The story also has a strong connection to Okayama (Kivy's birthplace). Kivy represents Momotaro.

Kivy's name is pronounced as "kibi", which is Japanese for millet, referring to the dumplings he makes.

Full 2P Win animation
Add a photo to this gallery

Kivy on a card with the other members of oni tai Z (One, Ucchey, and Kenn)
Add a photo to this gallery 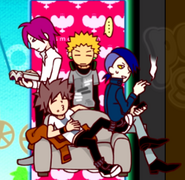