Kagome is one of the characters from Pop'n Music 7.

不思議な世界観の詩と朗読スタイルでカリスマ的人気を持つ少女詩人。本人はそんな世間の評判には全く興味なく、いつも遠くにある何かを探し求めているみたい…。 A poet girl who is popular for her mysterious world view and her charismatic way of reading poems. She herself isn't interested in that sort of public reputation, and is always searching for something far away...[1]

According to her appearances, Kagome appears barefooted and often wears black attire.

Kagome appears to have slightly pale skin. She has black eyes and short, black hair. Her attire is a black gown that reaches her knees and a white flower on the top of her dress. She carries a silver bird cage.

Kagome's attire is almost similar to her debut, but several of details are added. (though her flower was scrapped) Her lower gown added shades of gray, transparent details. Around her neck, she wears a gray scarf. She still has her silver bird cage and now is shown with a blue bird in some animations.

Her 2P palette shares the same colors from the 2P pallete in pop'n music 7. Her bird changes to green.

Her change card is similar to her 2P Misty form, but her hair is in a slightly different style and her white lily is changes to a tropical, pink flower.

"かごめ" means "caged bird" in some context, referring to her bird cage. Also, it could literally translate to "lost" which fits Kagome's theme of mystery.

Neutral 2P
Add a photo to this gallery 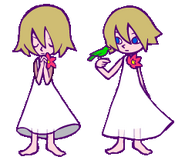 Kagome as she appears in Lapistoria 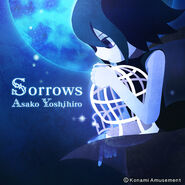 Jubeat festo jacket
Add a photo to this gallery

Three of Kagome's cards, including normal, change and LOSE 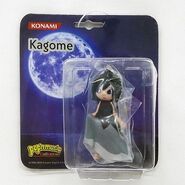 Kagome's 3D keychain
Add a photo to this gallery