K-SUKE is one of the two main characters of the Pop'n Music spin-off, Utacchi.

K-SUKE is described as the "Ice Mint" candy of the Candy Kingdom, and is much of a popular idol.

K-SUKE takes the form of a young brown-eyed boy with short honeydew-colored hair. His attire consists of a cerulean top underneath his indigo, sleeveless jacket. K-SUKE sports a pair of boot-cut pants and shoes that match the color of his jacket and finger-cut gloves. His attire shares light crimson highlights and cyan sections. There are a pair of eighth-note inspired headphones on K-SUKE's ears, and he holds a blue-colored microphone that looks like a snow cone. 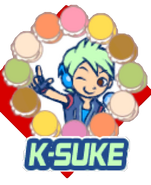