Filling his head with guitar music

Johnny D is one of the CS characters from Pop'n Music 4.

ギターに夢中の高校生。地元のライブハウス出演をめざしてメンバー募集中なんだけど、全然集まらなくてガッカリ。
A high school student obsessed with the guitar. He wants to recruit members for local livehouse appearances, but he's disappointed in being unable to get them together.

Johnny D's appearance is a giraffe boy with chocolate-brown hair that covers his eyes. He wears a school uniform that consists of a periwinkle vest that has a white shirt underneath, dark green pants, and dark gray shoes with light highlights. Johnny D wields a maroon-colored acoustic guitar. His original palette is used again in Group Sounds. 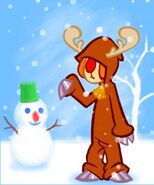