Iroha is one of the characters from Pop'n Music éclale.

-時は平安、世はいろは-
命みじかし☆恋する乙女の疾風怒濤☆攻めがるた～
There was peace one time, in the age of Iroha.
Life is short☆The loving lady's raging gale billows☆attacked~

I decorated the female division with lots of cuteness, she is Playing Card Queen Iroha. Hey, everyone!

I warmed up since I was saying that I want to make a hundred-man poem in sound at the beginning act surprisingly.
Iroha's costume is a peaceful, twelve-layered yukata-like image, doll brand.
The colorfullness is éclale-ish, but the coloring itself is quite soft peacefully. I think this compilation was not considerably a superb balance!
With her mini skirt costume, was it more energetic than the playing card image? And I thought that the song is full of energy! Good feeling~!

wac talked about the heat in emergency to create a love song, but the instant character theme is more playing cards than love!
Please experience the enthusiasm that raises Iroha's playing cards in her animation.
I'm worried that the peaceful-loved theme is quite wonderful, and I placed the playing cards in the main shaft, not from the conclusion, since from now, in the time that wac considered Iroha's human life in total.
There are playing cards and love, after headlong! It's Iroha, the image that doesn't seem skillful.

Iroha has purple eyes and pale, lilac eyebrows, matching her long hair, styled in long, thin pigtails with the rest of her hair down, decorated with yellow, round ornaments that have three points on top and white ribbons on part of them. Iroha's costume is a traditional, Japanese, short-sleeved kimono with a group of five, lousy and bright colors: magenta, light blue, and chartreuse for her entire kimono, yellow clogs with magenta pink soles, and violet knee-high stockings. There are white accents and sections all over her outfit, along with a lavender-colored striped ball ornament on the center of her white obi. On her Win animation, her hair is reanimated with thick, straight pigtails and braids that curl around to the top.

Iroha's 2P recolors her hair pink with baby blue ornaments and ribbons, while the rest of her clothing has a scheme of darker colors: black and red for her shoes, stockings and kimono along with white and baby blue for everything part of it. Her eyes are red, while her eyebrows are dark, pale pink. Her Win animation has a blue variant of her haori with black sleeves that consist of pink flower patterns; underneath's a violet dress bottom. 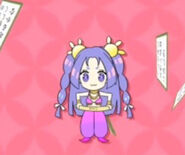 Iroha getting dressed up as NaN.
Add a photo to this gallery
Pop'n Music éclale characters
Returning Characters
Éclale Characters
Retrieved from "https://popnmusic.fandom.com/wiki/Iroha?oldid=70739"
Community content is available under CC-BY-SA unless otherwise noted.