Ikkei is one of the characters from Pop'n Music 10.

なんだか妙な編成。なのになんだか大人気！？なジャズバンド「サムライズ」。 やんちゃ坊主達は座禅そっちのけで今日も元気にセッション中～。
A strange organization somehow. Yet somehow popular!? Jazz Bands "Samurais". A mischievous boy who is in session today in Zen meditation.

Ikkei is a mischievous boy who composes jazz music that is said to be somewhat strange, yet very popular. He vigorously meditates daily.

Ikkei has black eyes and the top of his head is covered in bandages. He wears a kasa hat with a blue design on top, as well as a long white robe tied with a blue obi and a necklace with a symbol on it. He wears a black haori over the robe and black tabi striped blue. His right arm has a blue wristband. Ikkei wields a shamisen.

According to his 2P color palette, Ikkei's skin is darkened into brown, but his eyes remain the color of his original palette. His kasa hat is colored salmon pink and purple, and the rest of his clothing are colored blue and white underneath. His obi, wristbands, and ankle bands are colored purple, while the handle of his shamisen is colored maroon.

Ikkei 2P
Add a photo to this gallery 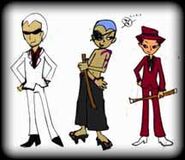 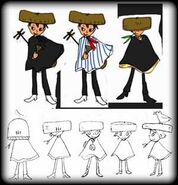 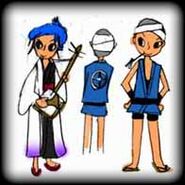