Ichi No Myou is one of the characters from Pop'n Music 10.

The gender and the personality of Ichi no Myou is tricky and indeterminate for some reason.

Ichi no Myou a very pale-skinned puppet with red eyes and black, middle parted hair. On its forehead is an M-shaped mark with a line through it. Ichi no Myou does not wear a shirt, but does have a red wristband on its right arm and a black kimono sleeve decorated with a red flower on its left. It wears an orange obi and a long grey skirt, with black platformed zori with red straps on its feet. This appearance is used again for 黒点 in Pop'n Music Lapistoria.

In its 2P color palette, Ichi no Myou's skin is changed to an ashy color, and its eyes and skirt are the same blue. Its hair, obi, and sleeve are now white. Its wristband, sleeve flower, and zori straps are black. This 2P color palette is used for Elegy 2 in Pop'n Music 17 THE MOVIE. 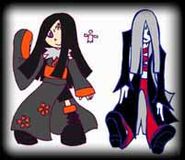 Pop'n Music 19 TUNE STREET card "Ferry on the Asaki River in the Abyss", featuring Ichi No Myou along with Ni no Maru, Goku-Sotsu-Kun, Onnanoko, and Hoshi no Hito. 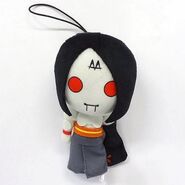