Ice is one of the characters from Pop'n Music 3. Although he makes his debut in pop'n 3, he was a Pop'n Music 2 CS character.

A popular musician in the Pop'n world, he is Timer's producer who was requested to assist MZD and P-CAT.

Ice is a guitarist, and is interested in hanging out with Timer and Shollkee. Ice is a popular male, although he is shy about being himself. When being taunted or seized by failure, Ice sometimes loses his temper, as he breaks his own keytar, but either Timer or Shollkee will soothe him down.

Ice appears as a peach-skinned guitarist, with brown eyes and blonde, short hair. He wears a red suit jacket, along with the blue tie, matches his piano-like guitar and his shoes. He has white pants that go to his outfit.

Ice's attire consists of the same jacket and the same pants as the player mode, but the jacket is darker and contains brown shoes. He has the same piano-like guitar. His original color palette is confirmed in Digi Techno, from the CS version of Pop'n 8.

In his 2P color palette, Ice's hair color is regularly brown instead of blonde. His eye color is also the same thing but brighter. His dress jacket is colored dark periwinkle, especially his pants are tinted in a lighter version of blue. Ice's shoes are majorelle blue, and his tie is colored teal.

Ice excels with a very light blue coat with blue highlights on his neck and bottom and buttons. Underneath are a pair of white pants with a dark teal-colored boot on his right leg while the other has a short legwarmer. His keytar is colored with an identical color as his highlights. His original color palette is shown in Idol Wave, in Utacchi and Pop'n Music 19 TUNE STREET.

Ice is imaged donning a plain polo shirt with a pale blue plaid vest, a green brooch, and a lavender-colored tie. There was a wristband that has an identical color as his tie. Ice wears white pants with grey highlights on the ends and boots. The KEYTAR remains its respective color as his previous appearance. His original color palette was confirmed in マジLOVE2000%.

Ice, along with Shollkee, appears on Judy's FEVER! animation.

Ice is shown on Timer's Lose animation, donning a baby blue suit with several of white highlights, that includes his pair of shoes also; he also has a red bow with a yellow round center. His 2P variant has tan complexion, light pale blue hair, and black and mauve re-colorings of his clothing, with a little bit of platinum.

A musician who is very popular in the Pop'n world. This time, he's participating in solo activities.

He is finally ON STAGE after a long time! He's off to give out a brilliant performance with his newly refurbished cyber taste!

Today is the last day of a tour that has filled domes nationwide with excitement. "I will do my best~ Follow me 'till the very end!!"

Ice in Pop'n Music 3
Add a photo to this gallery 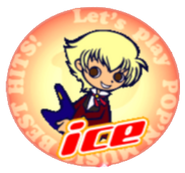 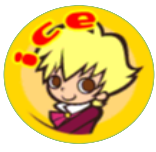