View source
watch 01:36
We're Getting Mutants in the MCU - The Loop
Do you like this video?
Play Sound

The two being entrusted by doing missions together

IO-Lower are characters from Pop'n Music Lapistoria. They wield a white, diamond-shaped lapis.


The duo who are sent in order to fulfill their mission.


With their song powers, they govern the stars' fates.

IO-Lower are described as "angels of the galaxy", who've been sent to fulfill missions. iO is usually seen using his own strength, while Lower is shown to have more defensive powers. They seem to believe that one of them would be enough to complete a quest, but they must work together as a team to stop themselves being regardless.

iO has short and messy blond hair decorated with three white pins, greenish skin, pointed ears, and deep green eyes. He wears a V-neck black top with a matching scarf, gray vest, and white fingerless gloves with light blue bracelets. His pants are white capris, with a blue section on his right leg and a red section on the left, and his shoes are red and white. A red chain hangs on the right side of his pants. Lower is the taller one, with long brown hair tied back in a ponytail and similarly green skin and pointed ears, though his eyes are red and covered by black translucent glasses. His attire consists of a purple and black open coat with silver trimming, fingerless gloves and a red tie, and purple pants with black boots.

In their 2P color, iO's hair becomes white with black pins, and is eyes are golden yellow. His skin tone also becomes a dark peach color. His shirt and scarf are dark red with a black vest, and his pants are navy blue, gray, and black with red and black shoes. Lower is given a peach complexion as well, and his hair is cerulean while his eyes remain red. His coat, pants, and shoes are all black and red with gold sections. In this palette their diamond lapis is blue.

iO-Lower in their FEVER! Win 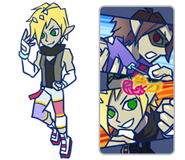