Screams and yells can be heard. A sample saying "What can you do when the sky falls in on you?" is used toward the end of the song. 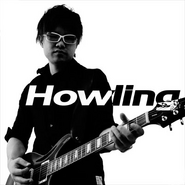 Howling's jacket
Add a photo to this gallery