A problem child who causes a commotion

この世界を司る4つの元素。私達と学園に架せられた秘密。
…これで理解ったわよね？
This world is responsible for four elements. Secrets have imposed on the school with us.
...Is this understandable?

Hiumi is the school council president and the daughter of the General of the hospital. Unlike others, she is calm and really mature like Fuga. Hiumi wields a cerulean pear-shaped lapis, when she arrives at "Another World", created by MZD.

She is a fan of Pastel-kun, the Mascot from the REFLEC BEAT series, and has a sense of justice to use her powers to destroy evil deed.

Hiumi is born with a married couple who have founded a famous hospital. Since then, she has been studying medicine and nursing. One day, her cyrokinesis powers were awakened; however, her powers have caused a huge disaster. Her parents decided to lock her to prevent any chaos, thus Hiumi became a hikikomori for years. One day, she was visited by MZD along with Mimi and Nyami. Mimi explained to Hiumi about her powers. Hearing this, she decides channeling her inner abilities. Although her parents were against this, they happily saw that she mastered her new abilities.

Hiumi is first introduced as a tall, bright-skinned female with glowing, cerulean eyes. She has powder-blue-colored hair that stretches to her waist, and the ends are styled in waves. She wears a white headband. Her vestments are a gray, long-sleeved dress and white knee-length boots with gainsboro soles. The blue band is patched to her left arm and a badge is located on her left chest.

Hiumi's 2P color palette no longer holds icy color schemes. Her hair color shifts into a dark blonde color, and her eyes are neutrally green. Her whole dress and soles are colored light blue, while other parts of her clothing are colored red. Every black color is shown on her neck cover, belt, sleeve highlights, and pants.

Her 3P recoloring has dark grey hair, pale skin, and purple eyes. Her coat was re-colored as light teal, her boots dark blue, and her tab purple; the rest of her pieces of garments are normal blue.

Hiumi's hair is tied up into a flowing ponytail with a blue headband. Her vestments are a white dress with elbow-length sleeves, a badge, a blue waist belt and a matching watch worn on her left wrist. Hiumi is shown wearing gray pantyhose and white flats.

Her 2P color palette gives Hiumi light pink hair and a magenta headband, especially her green eyes from her previous debut. Hiumi's shirt is colored light cyan, her belt dark grey, and her entire stockings and flats in a few, dark purple schemes, and her lapis is colored pink instead of blue. This palette is confimed in ice crystals from the same game

One of her extra outfits for her talk sprite includes a blue bikini, overlapped by a very light blue shawl, alongside with a white broad hat.

Hiumi's winter attire is a light parka and yellow gloves.

Hiumi can be seen with Jade's attire once.

Hiumi appears in each Tsugidoka! character's FEVER! and Win animations.

In Pop'n Music Lapistoria, Hiumi appears on Fuga and Albireo's Lose animations. She also makes cameos in Miyu's Miss (along with Retsu) and Lose (along with Rinka) animations at the same time.

Pop'n Music Lapistoria:
氷の能力を秘めた生徒会長はラピストリアでも大忙し、今日もみんなの学園生活向上のために頑張っているんだって。
The student council president who hides an ice ability but busy in Lapistoria, I heard that she is working hard for school improvement of the living standards of everyone today. 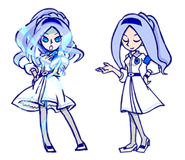 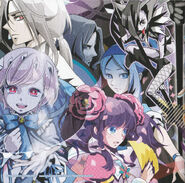 Hiumi on the back cover of the Pop'n Music Lapistoria Original Soundtrack vol.2 along with Jade, Jadeite, Weiss, Rinka, and Phantom.