All of my fans (Thank you for your support!)

Hikari Nijino is one of the characters from Pop'n Music 13 CARNIVAL, and the first member that makes an appearance from the idol trio, Nijikko.

いっくよ～！！みんなうちらの曲聴いて、ちょ～元気にはじけよーっ♪
Let's go~!! Everyone listening to our songs, I hope you will feel well♪

I've finished the cool idol girl that incorporated "that feeling", which was taken for Yoshi-kun. I'm not sure whether her own hairstyle happened. The three colors are not polished.

Yoshi-kun sang with an awesome energy that was convalescent, ahahahaha! Wait, I laughed. That was really awesome!

﻿Hikari Nijino is introduced with mauve-colored eyes and pink hair color. Her hair is tied into a pair of small and curvy pigtails with blue and yellow streaks in each. Hikari wears a blue tanktop with a heart-shaped microphone and an eye protector. She is shown wearing a white skirt with pink hearts on the tips, and white boots with blue, lengthy socks. Furthermore, she have a red patch in each tip of her boots.

Hikari, along with Sora Hoshino, create cameos in Mirai Yumeno's Lose and Win animations in Pop'n Music 15 ADVENTURE. Her apparel is vastly different from the other members, such as a yellow top with white shorts, while the rest of her clothing are identical.

Hikari, along with Mirai, create cameos in Sora Hoshino's FEVER!, Lose, and Win animations in Pop'n Music 17 THE MOVIE. Her costume is identical to Sora's, but with a yellow variant.

Hikari and the rest of the Nijikko members appear in Keigo's Lose animation, along with Keigo himself, Erika, Justice, and Mimi.

In the Sunny Park card collection Vol.2, Hikari new garments are a white dress and boots. There are powder blue and yellow highlights in each clothing. She wears a waist belt that is decorated in a pink heart and a bow that consists of the Nijikko idol group's main color schemes.

Hikari-chan of the fluffy colorful ribbon appears for an interview about a new song that was announced! Well, this time, her outfit was designed by the girls of the Rainbow Trio. Recently, she's also made appearances on many variety shows, let's look forward to the continued support of those three peoples' boiling popularity! 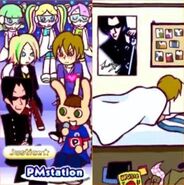