?, known by fans as Hatena, is one of the characters from Pop'n Music 15 ADVENTURE.

体から世界が？喜びは光に？？悲しみは闇に？？？
全ては彼と出会う前のちいさな出来事・・・
Is this a form present in the world? From the joy of light? From the sadness of the dark???
Everything is in it and the small events of past meetings.

It began with the demo song that May that had mixed opinions...
Even when you think you've understood everything,
This is where all of the boss characters originate from.
Emotions that have been present throughout the years pierce through its body
Of water
Of earth
Of fire
From the joy of light
From the sadness of the dark
In this magnificent world, overnight, a shape was formed.
The purpose of its existence was to begin a trip to seek and meet people all over this new world.
It had met MZD in a past encounter - for a small time, he took care of the form.

Take a careful look; it's the size of your palm.

Hatena looks like a navy blue-colored silhouette, and possesses horns, cleat wrists, a piece of hair, and elf-shaped ears in main occasions. They also wield a trident sometimes in animations. They are colored black sometimes in MZD's 2P palettes.

In Niente, Hatena takes a different shape of simply a lean, black figure. Their 2P palette colors them white.

Pop'n Music: Usagi to Neko to Shounen no Yume profile:

This place is still the garden of God. 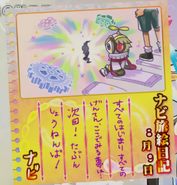