Those who live in the night forest

Harpya is one of the characters from Pop'n Music Lapistoria.

夕暮れに忘れ去られた森深く、空の者は問いかける。
心を支配する音色は風に乗り、全ての生き物は声を潜めた
In the depths of a forest that dusk has forgotten, the one from the sky poses a question.
The tone of that voice rises with the wind, influencing the hearts of all living things, making them lower their voices

Harpya is a brave, elegant humanoid bird who lives in a far away forest, serving as a guardian to the creatures. She enjoys playing the ocarina and appears to be familiar with Wolfgang, living in the same forest. Sometimes she's shown to be teasingly playful with him.

Harpya has short light honeydew colored hair and light pink eyes. Over her hair is a white crest with pink and blue feathers. Her body is covered by a dress of light blue and white feathers, and over it she wears a long, pale pink scarf. Her right arm is gray with pink fingernails, while her left is a wing with white, blue, and pink feathers. Her legs are dark gray as well, and she wears white boots. 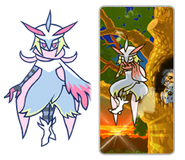