Hannes's history can be found here.

Hill of the Wind

Hannes, also known as her full name Hannes Farrugia, is one of the characters from Pop'n Music 15 ADVENTURE, and the second official Zektbach character.

A girl who works at the monastery that prays for God and the people.

Peaceful days change according to the god's revelation...

We can only see Hannes' silhouette in nearly all of her animations, aside of her attire of a nun. However, she is revealed as having blonde hair and blue eyes in her Win animation as well as on her Change Card.

Hannes with her sword Apocalypse in Chapter 4 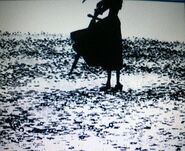