A shrine from a distant country

Guwanzesama is one of the characters from Pop'n Music portable 2.

Guwanzesama has wide eyes, dark circles, pale grayish skin and messy black hair tied back with paper streamers, with the underside of his hair being colored maroon. He is only wearing a short white dress tied together with a red sash. He is often seen sucking his thumb.

His 2P changes his skin tone to a pale purple color, and his outfit and steamers are dark gray. The red cloth of his attire are light cyan, and the underside of his hair is colored bright red.

Guwanzesama's name is derived from a Japanese word that can mean "innocent" (頑是無い, ganzenai?) or "separated from everyone." It implies the person is still young and doesn't know anything.

Guwanzesama with Timer, Parabo, MZD and Hushman in the Fantasia rare card "どこでも☆夢のパーリィータ～イム！" 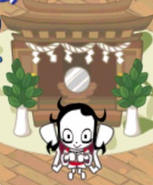