Somewhere in Round Star

Speaking to people with a speech

People who are against me

Goku-Sotsu-Kun is one of the characters from Pop'n Music 14 FEVER!.

With such frightening behavior, Goku-Sotsu-Kun is the rebellious, sadistic, and tyrannical dictator of the Round Star. He summons an army of his autonomous own selves to conquer areas of the Pop'n World. Goku-Sotsu-Kun has a sadistic, secret past that is hidden within his mind.

Goku-Sotsu-Kun resembles a white-skinned male with very large black colored eyes, red lips and black hair. If you look at his head from the side, it is very large and round. His nails are painted a black color. His uniform resembles that of a Japanese schoolboy's or military outfit, navy blue with two white stripes on the sleeves of the uniform. There's white stripes as well on his black boots. His original palette appears again in 地の記獄編 from Pop'n Music Lapistoria.

Goku's 2P palette changes his hair color blonde, and his eyes maroon. His entire uniform is colored red-orange, while his shoes are brown.

Goku-Sotsu-Kun, along with Usao-kun, appear behind of Lisa, Tsurara, and Milk in one of Milk's cutscenes in HELLO! POP'N MUSIC, wearing a black kimono. 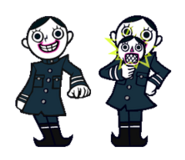 A depiction of the HELL 14 expert course (top right). 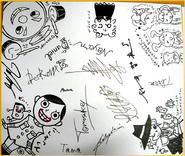 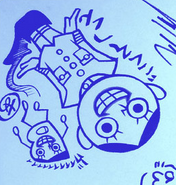