Glutamine is a popular cover artist on the website Nico Nico Douga, making a cameo appearance in Pop'n Music Lapistoria. He wields a pink, diamond-shaped lapis.

Glutamine is a popular utaite with a nasal, energized voice who sings with much passion, by being able to cover large ranges of different tones and emotions.

More information on Glutamine can be read here.

Glutamine appears with long, messy brown hair with long bangs, and coral pink eyes. He wears a plain black hoodie with a white zipper, gray sweatpants, and black shoes and fingerless gloves. He also wears a pink and white headset.

In his artwork his outfit is slightly modified, as he wears a coat with rolled up sleeves, black pants with a belt hanging off the side, a white V-neck shirt, and full black gloves. His headset is absent as well. Glutamine changes into this attire in his FEVER! Win animation.

DANCE
Add a photo to this gallery 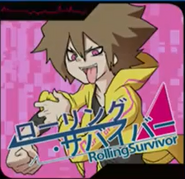 Glutamine on the jacket of ローリング・サバイバー 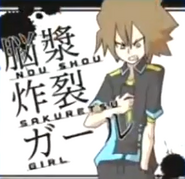