Traveling in the sky

Glen is one of the characters from Pop'n Music: Usagi to Neko to Shounen no Yume.

いつか見た空飛ぶくじらを追いかけて、
伝説の冒険者は7つの虹を越え、空を駆ける Chasing after a flying whale he saw one time,
the legendary adventurer crosses the seven rainbows as he dashes through the sky.

It was Glen, an adventurer who travels in the sky without flying in the ocean, following the flying whale, as the theme of the song was "sky".

Actually, it was the first time to design a character from Pop'n and while I was excited, I was making a delusion talk with a Pop'n theme designer.

The cool type character from tuning was decided early, but since I got a lot of it rough, it was OK with my favorite plans~! I was posing with guts.

As adventurers, various delusions can't stop and I'll go to various countries so I must know the delicious rice in various places... It's a little noisy gourmet for absolute rice... I'm sure the food looks good...

And since it is a captain's position, trusting from friends is definitely thick... Though it could be very good if it's a little overworked...

But I will not appeal it myself... Because it's a shy store...

Or good, delicious rice... Just as long as you buy a hungry snack...

I was doing a draft whilst munching.

Since animation were made by professional people, try making dynamic cuts or trying to make it possible to enjoy air travel with Glen, so feel the wind of big the sky of Pop'n world as if I'm glad if you get it + ゜ *. : ゜ +

Glen is a man with tanned skin, hazel eyes and short, brown hair, worn under a black cap with googles; matching with gloves and boots. He wears a pale golden dress with brown and yellow sections along with a blue cape.

Dance (2P)
Add a photo to this gallery 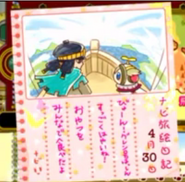 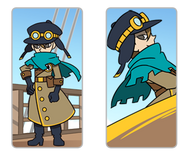