Gerhard is one of the characters from Pop'n Music Lapistoria. He wields a red, diamond-shaped lapis.

一人前気分で気ままにフワフワ。人間界のお菓子ってサイコ～
…うわ！またアイツに見つかった!!
A single serving of capricious fluffiness. Sweets of the human world are the best~
...Wow! I also found some on that guy!!

Gerhard is a demon from Hell who enjoys making mischief. He loves craving for sweets and often travels outside in search for more in the human world, only to be dragged back later.

Gerhard is a small demon boy with stormy lavender hair and salmon red eyes. He has mahogany-colored demon wings and a tail with small horns on his head, and dons a black, sleeveless top with a hood. He then dons black shorts worn over red leggings and boots that match his shorts and a belt with a yellow circle that also matches his clothing highlights. His FEVER! Win animation gives his larger horns, a full navy blue suit with yellow thin accents and a cape.

Gerhard's 2P colors give him teal eyes, and the red parts of his outfit, including his wings and tail, are also teal. His hair shifts into a very light blond and he's given a darker skin tone. The black colors of his outfit remain the same.

Gerhard's new attire in the Lapistoria Card Collection shows that he wears fancy clothing. It consists of a mahogany cape, a black vampire-like costume with white sleeves, several white frills around the neck, and a dark red tie with a round, yellow ornament. Though this is a new attire, he seems physically upset and is disliking it a lot. 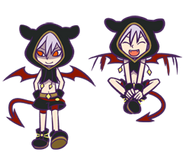 Gerhard with Wilhelm and Jack on the Pop'n Music éclale card "I Wanted to Run Away from the Worship. 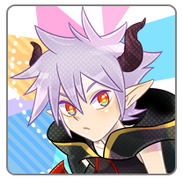 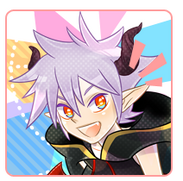