People messing with my lifestyle?

Gere-Gere is one of the characters from Pop'n Music 17 THE MOVIE.

激しいロックを奏でるカメレオン・マスクの青年。その素顔は誰も知らない…。
A young man in a chameleon mask playing intense rock. Nobody knows his true face...[1]

Gere-Gere is a yellow-skinned rocker wearing a chameleon mask designed with a mohawk. He is only dressed in a black speedo, blue shoes, a guitar harness and spiked bracers.

Gere-Gere has a 2P recoloring that has his mask periwinkle, and his body magenta. His guitar is now light blue, and his shoes are black with thin, white lines.

Gere-Gere appears in Wakuwaku! Pop'n Manga strips #492 "Once in a While" and #517 "Surprised and Laughing at What We Heard." 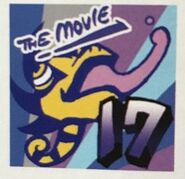