World Tour (as part of the Miracle 4)

Force is one of the characters of Pop'n Music 9 and the fourth member of the Miracle 4.

突然のオファーでソロでステージに立つことになったフォース君。
ミラクル４スピリッツだ！がんばれ！！
By a sudden order Force was to be solo on stage.
Miracle 4 spirits! Go for it!![1]

Force is a cowboy living in Kansas and the last member of the Miracle 4.

Force has tan skin, bright blond hair, and black eyes. His attire consists of a hot pink cowboy hat with a yellow band, as well as a hot pink and yellow long sleeved jacket, emblazoned with an orange "P". He wears an orange scarf tucked into his jacket. His belt is also hot pink and worn with blue jeans, covered by cow prints chaps, as well as yellow shoes. He carries two yellow pistols with him.

Force's 2P color palette re-colors his hair as a salmon red color. His hat is colored black, while his band remains yellow. Force's top features are colored in a lavender hue, such as his pistols and bottom half of his jacket, and the top part of his jacket is colored fuchsia. Force's chaps are yellow with black spots and his shoes become pink.

Force is shown wearing a blue vest with a star emblem on it over a long sleeved white shirt with pink trim. His hat is hot pink with a white band, and his belt and scarf share a similar pink color. His belt has the "P" emblem once again. He wears lime green and white pinstripe chaps over his black jeans and blue boots. He still has two pistols, but they have been redesigned with both yellow and pink.

Force's 2P colors once again give him salmon red hair and eyes. His shirt is now blue and worn under a white vest, while his hat and chaps become black. His belt and scarf are changed to yellow, and his pistols are yellow and blue.

Force's original appearance in Pop'n Music 8 included a white shirt with rolled up sleeves and a brown collar. His hat, scarf, and pants were all pink, and his belt and hat trim were blue. He wore dark brown chaps with a light brown pattern over white boots.

Force makes a cameo in The King's Win and Fever animations in Pop'n Music 10, along with Rolly.

Force makes an appearance in the Pop'n Xmas animation in X-mas Presents, wearing his debut attire. He has a Christmas wreath around his hat and his pistol is shooting a small tree.

In Uno's Dance and Win animations in Pop'n Music 14 FEVER!, he sports a pink hat with blue trim and simple pink pants, as well as a long sleeved white shirt and blue belt, with an "F" icon on it. The "F" appears backwards in Uno's Dance animation however.

Pop'n Music 17 THE MOVIE:[2]
今度のフォースはムービースターでウエスタンポリス！？
キミのハートに百発百中！なんて、ん～デンジャラス★
Now Force is a western police movie star!?
Infallible in your heart! Oh no, how~ dangerous★

Force's name makes a reference to the number "four". 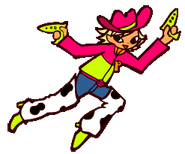 Force in his FEVER! Win 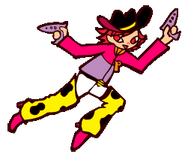 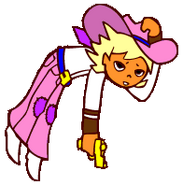 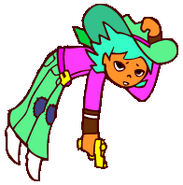 Force in his Win animation

Force in Pop'n Xmas
Add a photo to this gallery