All of the animals who come to the park

The coming of winter

Flora is one of the characters from Pop'n Music Sunny Park.

Flora is portrayed as the spiritual being of Spring, who is the light counterpart of Flamme. Happy, positive and full of cheer, she is friends with everyone and loves animals, especially the ones she sees in in the park.

Flora is introduced to be identical to Flamme, but she is a joyful little girl with yellow eyes and chartreuse-colored hair that is styled in two lower ondangos. She is wearing a garland with white cotton balls and colorful, pink stems and a sleeveless frock with yellow and orange highlights on the bottom and green wristbands.

Flora receives a change card in the Lapistoria card collection. She is presented wearing a garland made of colorful flowers with pink, green, and white stems, and her buns are instead styled into two looped braids. Her top is short and white with yellow frills around the shoulders, and she has white and pink bloomers with purple flowers decorating each side, red and white bracelets, and green stems tied around her thighs.

Flora is the Latin term for "flower". 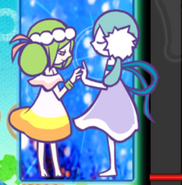 Shion with Flora in her Lose animation